On Sunday I completed marathon number eight. This was my second solo run of the challenge since there was no organised race I could participate in but unlike the Grand Union Canal in February where I had to carry all my supplies with me, this time I had my family in a support vehicle carrying water, sweets and energy drinks! It also meant that, unlike many of my previous races, we could actually get some photographs of me en-route. This was my first international marathon too, being on holiday in Newfoundland visiting family this was an ideal opportunity to do a long run through the fantastic scenery and clean air here.

The route I chose started on top of the hill just south of New Perlican and finished at the Lions Club in Old Perlican, the town in which we were staying. There were two routes I could have taken, the other being along the Southern side of the peninsula. The Southern road would have been considerably flatter but is a lot busier in terms of traffic and not nearly as scenic as the Northern road which takes in all of the coves as it winds through some seriously challenging hills – just see the profile on GB Mapometer to see what I mean!! 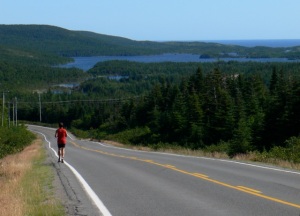 The good thing about hills of course is that all the “ups” have a corresponding down, so whilst I spent a fair amount of time power-walking up the more severe gradients I was able to keep my average pace up on the runs back down the other side. Considering the amount of hills I was still able to complete the run in 4h 23min which is on a par with the trail runs I’ve done in the UK. This was due in no small part to my support team who kept me supplied every few miles – usually on the tops of the hills so that was always a welcome sight to see a water bottle being held out at the end of a long climb.

At the end of the run, the local Lions club had prepared a reception for me with a very welcome lunch. The run had been publicised around the local community and they had been collecting sponsorship for a charity they support – The Max Simms Memorial Camp, which provides recreational facilities for disabled children. In total, my run raised $800 for the centre which was very welcome.

Joined by the crew for a couple of miles!

This was by far the most scenic run I have ever done and I certainly felt the difference from the unpolluted air. Seeing a couple of whales breaching in the sea off the coast was an amazing sight too! This will certainly be one to remember and having now run the inaugural “Baccalieu Trail Marathon” perhaps the Lions club will make it an annual event…

Enterprise Architect and self-confessed techno geek.
View all posts by thearchitect →
This entry was posted in Training Diary. Bookmark the permalink.