Well they call this the “prettiest marathon in Great Britain” and I would certainly agree with that statement because this was definitely a change from the tarmac torture I’ve endured over the last five races. However, to call this a race would be a a bit of a misnomer because you start on your own!! Basically this is a 4-stage trek around the outskirts of Cheltenham, starting and finishing at the racecourse. On arrival you register at the HQ and then when you are ready you get your timecard stamped and off you go. At each of the checkpoints your card is stamped and you get the option to return to the start on the minibus, allowing you to do as many of the sections as you feel able. The whole route is 26.2 miles however which is why it qualifies as an official “marathon” but don’t expect a PB when doing this one! I decided at the start that I would take my Garmin time over the clock time and would stop the watch at each checkpoint for a short break, which proved to be a good strategy in the end as I spent quite a while at one checkpoint with a bad case of the runs (yes ok – too much information). So, while my watch time came in at 4:57:28 as actual time spent on the move I would image the course clock time would be closer to 5:20 or so. 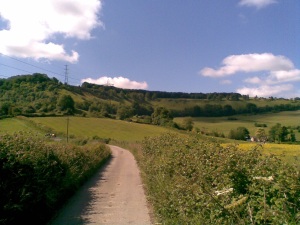 Off into the hills!

Anyway onto the course itself, the first stage starts out on single track roads and you start heading towards what is quite a significant climb up onto the panorama overlooking Cheltenham. It was only after a mile or so that the first waypoint took me off-road and into a field, which wasn’t too bad to start with as the ground was quite even but as the hills approached the gradient really started to take it’s toll and I was soon down to a stride as I was literally climbing up a steep grassy bank. I decided that the best approach to this race was going to be walk up – run down (wherever possible) and only run on surfaces where I wasn’t going to risk going over on an ankle and – and there were certainly plenty of those!! As well as the tracks and open fields there were a lot of  passages through hedgerows and small bridges over streams to negotiate as well as countless stiles and kissing gates – and this was just the first section… The  first checkpoint was a welcome sight, not just for the water but also to reassure me that I was following the map ok.

This was not repeated on stage two when I managed to get very lost having missed one of the small waypoint markers on a fencepost and ended up in a small village street that I couldn’t find on the little hand-drawn map I was given. A local passer-by couldn’t really make out where I should be going and just suggested I ran down the main road until a got to a road sign which I duly did and managed to get back on a heading to a village that was on the map. By this point I was worried that I’d completely messed up the route but when I eventually got to checkpoint two, the official half-way stage, my Garmin clocked me in at just over 13.1 miles so despite missing out on some of the scenery I was still ok as far as distance was concerned and decided that was good enough. 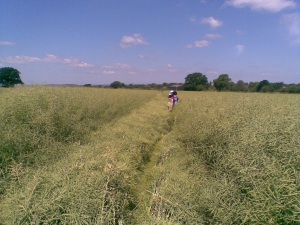 Yes, that really is the path!!

After a water refill in my new Camelback belt (really good!) and an energy bar I was off again and this time paying more attention to the map. Section three was called “Fields” and they really were not joking as most of the route was across completely open terrain with only the faintest hint of where the actual path was but thankfully there were plenty of walkers on the route taking time to read their OS maps and GPS’s so I found them to be a reliable indicator of the route. At checkpoint three there was the offer of free squash and biscuits and a request to sign a petition to stop developing on greenbelt land, which was a small price to pay for a couple of fig rolls, and then off onto the last section known as “Villages”. As the name suggested this had far more of the solid surfaces I was used to and I was able to actually run a decent pace for the final few miles but this soon dropped back into the cross-country terrain as I hit mile 23. By this time, negotiating a stile with tired, stiff legs was becoming quite a strenuous exercise and having banged my knee in the same place on about 10 or more of them by now I was starting to hate every one but soon the racecourse came into view and that last mile magic kicked in as I jumped the last stile and ran down the road to the HQ to be stamped out after more than five hours of being attacked by nettles, thorns and just about anything else that the British countryside could throw at me.

Still, this was without doubt one of the most enjoyable races so far and the overall event organisation was superb with plenty of water available, a friendly family atmosphere and some spectacular views. I fully intend to come back next year and do this one as a walk so that I can better appreciate it. Full marks to Cleveden Vale Rotary Club for a great event.

The route I ended up taking is below and the gallery contains a few more pictures.

Enterprise Architect and self-confessed techno geek.
View all posts by thearchitect →
This entry was posted in Race Days. Bookmark the permalink.