Well, Sunday saw marathon number four out of the way so that makes me a third of the way through now. This was without doubt the best organised race so far in my opinion. The management at the starting line, the broadcast of information, facilities and race marshalling were all first-rate. There were around 3,500 runners on the day with approximately 1,300 participating in the full marathon (the rest doing the half) so a feat of organisation in anyone’s book!

However, this was by far the hardest course I have run to date and as a result I only managed a time of 4:07 which is a bit gutting as I was hoping to maintain a run of sub-4:00 times. The first mile or so consisted of a lap of Stratford town centre which was naturally closed to traffic for the start. This provided a great confidence boost as you soaked up the cheering of the quite substantial crowds before heading out onto the local roads. This was a two lap circuit for the marathon with the second lap deviating somewhat from the first. For the road-based element of the course the going was pretty much as you would expect. There were one or two shallow gradients and only one real “hill” for which you were rewarded with a 14% downhill straight after a two-stage climb. However, the final three miles of the first lap and the last six miles of the second lap were along the “Greenway”, a disused railway bed now used as a cycle track. The surface is hard-packed gravel/grit and it is just one long straight line with a very slight incline as you head back towards Stratford. There was also little or no shade for the majority of the Greenway section so when the sun decided to reappear at mile 20 I knew it wasn’t going to be pleasant! For the final six miles I dropped into a run-walk-run cycle that I was unable to get out of until after mile 24 and that burned up all the time I had accrued “in the bank”. I knew I wasn’t going to break 4 hours at around 23 miles and as the twinge I’d started with in my right knee was now really starting to hurt I decided to ease up and save whatever I had left for the last mile.

As with any marathon the finish line was a welcome sight and a managed to squeeze out a sprint for the last 100 yards (yeah I know – crowd pleaser)! The announcer was making every effort to get everyone’s name read out as they crossed the line and like many of the larger races now they had employed chip timing for an accurate result. 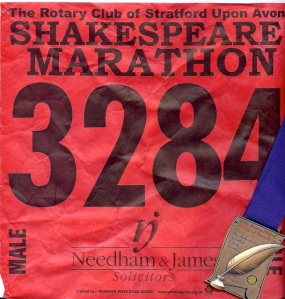 All the finish line facilities were more than equipped to cope with the numbers and the weather remained bright and sunny for everyone sprawled out on the grass wondering what possessed them to sign up for such torture! As I’d arrived so early I’d managed to park virtually opposite the finishing area and thanks to a secure bag store run by the local Sea Cadets I didn’t have to run with my car keys jangling in my back pocket this time either. So, whilst I cannot fault the Stratford Rotary Club for such a well-organised event I doubt very much I will be signing up for next year as it’s such an unforgiving route. Unfortunately for me now I’m nursing two very sore knees – most likely tendonitis – so I’m strapped up with supports and hoping Voltarol will ease the inflammation so that I can get back out on the roads to be ready for Edinburgh next month.

As always, thank you for your continued support.

Enterprise Architect and self-confessed techno geek.
View all posts by thearchitect →
This entry was posted in Race Days. Bookmark the permalink.